HATCHET ALLEY AXE THROWING IS NOW OPEN!
Reserve any of our 6 axe-throwing lanes and choose between a number of throwing games and challenges, all digitally projected onto the throwing surface, giving you full control of the fun!
Click Here to Get Started! 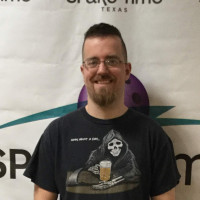 Jason Barge joined our team in Temple this past August, in 2018. His journey began with us as a bowling counter attendant and it didn't take long for him to begin to stand out from his peers. Being from Australia, his accent as well as his sense of humor have helped him stand out and become a team favorite.

When he's not working, Jason enjoys reading, playing games, and watching anime and wrestling with his children. He hopes to work his way up in the company to be able to one day support his wife and kids without her needing to work.

Jason enjoys his work and gets along well with everyone. His advice to his fellow peers is to remember to keep things in perspective. Don't let a bad moment become a bad day. If you're looking for laugh, our advice is to ask Jason about his idea for an underground boxing kangaroo fight club (his unofficial retirement plan) next time you see him. We promise you won't be disappointed!